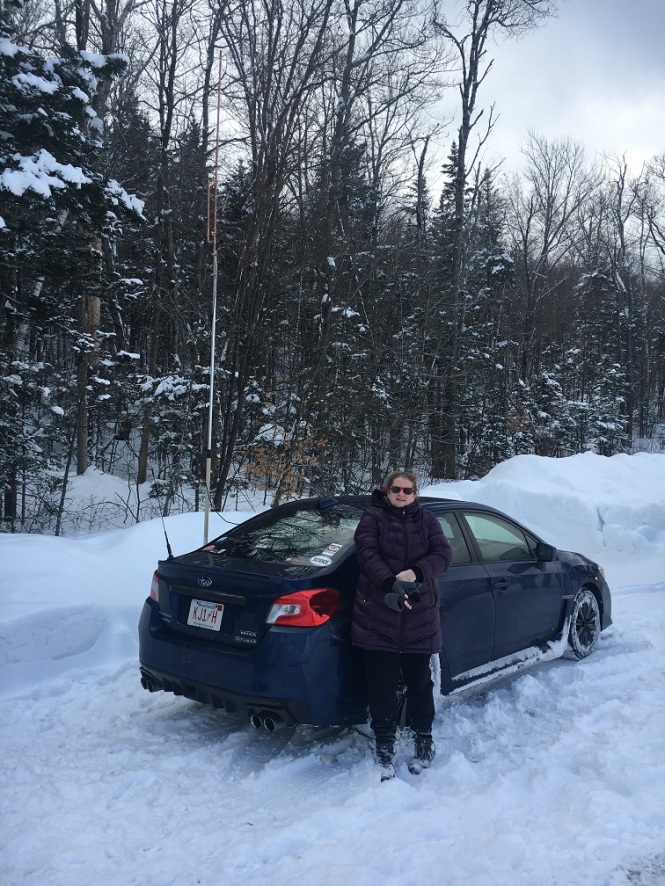 Here’s another variation on a portable mast that uses a different key ingredient. Instead of fiberglass pole sections, this one uses a telescoping painters pole for the mast. They are available in sizes that range from 4 to 8 feet, 6 to 12 feet, and 8 to 16 feet. This is the 6 to 12 foot version.

The antenna is the KB9VBR breakaway J-pole for 2 meters. When split into two parts it fits perfectly into the trunk of Justin’s Subaru WRX. In fact, the only part of this setup that doesn’t completely fit in the trunk is the painter’s pole itself, which does fit with half the back seat folded down.

The base is a 1×6 scrap of wood that was found in the basement. You can use a piece of plywood, sheet metal, or anything else solid, flat, and wide. The car parks on top of the base to hold it securely. A pipe floor flange is attached near the end, and a steel pipe screws into it. The painter’s pole sits alongside this pipe, and three hose clamps secure both of them together. (A cordless drill makes short work of tightening and loosening the hose clamps but isn’t required.)

Up top, two more hose clamps attach the J-pole to the telescoping section. You might want to attach the antenna before putting up the mast, especially if you’re short since you might not be able to reach it afterward. (And don’t forget the coax!) Extend the telescoping portion, and the antenna will sit far above cars and people on the ground. This not only transmits and receives better than a mobile antenna, it also significantly reduces RF exposure to people on the ground.

Justin first tested this setup at the 2018 Team O’Neil Winter RallySprint. It worked perfectly, even in moderate winds at the north end of the facility. Where he normally ran 45 watts through his mobile antenna, he could crank the power all the way down to 5 watts and still be heard perfectly at the south end. The reception was improved as well, particularly from mid-point handheld radios.

At the 2018 New England Forest Rally, this setup proved instrumental in providing communications when Ken Block crashed and set the Maine forest on fire. Justin and another ham were positioned at the midpoint to relay between start and finish, who couldn’t hear each other directly. With officials at the start and the incident near the finish, this setup was put to the test in a true emergency situation. It worked perfectly.

Best of all, this mast system cost less than $50 to build, most of which was for the telescoping painter’s pole itself. Even if you buy a KB9VBR J-pole antenna rather than build one yourself the entire setup can cost well under $100. Though not as critical at a small facility like Team O’Neil, the performance advantage could be a huge help at other rallies.